Available as Paperback and Kindle e-book

Can Song Bird rescue the OUTBACK before it’s too late?

ORDER NOW direct from the author 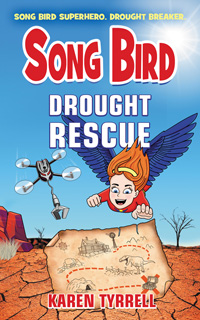 Rosie, aka Song Bird superhero, must save the outback from the drought.

Is Destructo behind the devastation?

Song Bird follows a secret map to unlock a mystery.

Can Song Bird rescue the outback before it’s too late? 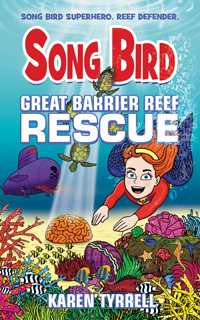 Rosie aka Song Bird, superhero must save the Great Barrier Reef.

Something weird is happening on Green Turtle Island.

Marine creatures have been dying, and now her friends are disappearing.

Rosie travels through a time portal to unlock a secret.

Can Song Bird rescue the Great Barrier Reef before it’s too late? 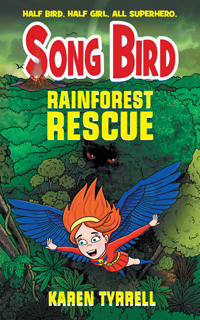 What’s really happening?
Can Song Bird unlock the secret before the world ends?

'Friends who stand together ALWAYS have Super powers.' – Jackie French.

All the bees are disappearing.

A giant sinkhole cracks open beneath Rosie’s school bus, and mysterious voices rise up from the depths.

Should Rosie lead a mission into Bug World to rescue Raven?

Or stay home and save her family?” 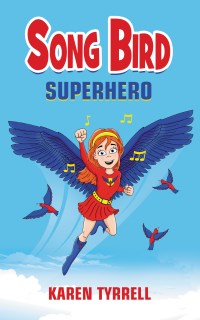 Rosella Bird’s nightly dreams are filled with flying. Too bad her waking hours are a living nightmare:

Her kooky parents are overprotective.

The principal bans her from the science fair.

Worst of all, she lives next door to Frank Furter, an evil boy-genius whose sights are set on seeing her fail! When Rosella learns to sing something incredible takes flight. Rosella becomes Song Bird, a flying superhero who saves the day. 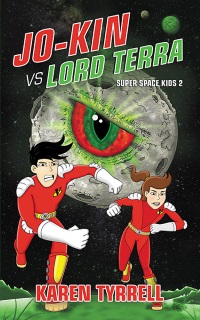 Reluctant hero, Jo-Kin never wanted to be a Super Space Kid. Not until Lord Terra kidnaps his Commander’s little sister and starts destroying the galaxy. Jo-Kin reunites the mighty Super Space Kids for an inter-planetary hunt for Lord Terra, finally meeting in a legendary winner takes all battle on Planet Deelish-us.

Can Jo-Kin defeat the all-powerful Lord Terra face to face?

Blast off with gadgets, robots and funky food in a hilarious outer space adventure that enlightens readers with the power of teamwork, problem solving, and resilience. 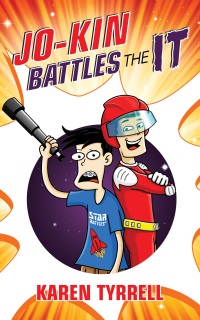 Goof ball Josh Atkins aka Jo-Kin wins the Super Space Kid contest alongside nerdy Sam Jones aka Sam-Wich. Their first Super Space Kid mission is to save the galaxy from deadly alien, called the It. When the It kidnaps Captain Astra, it’s a race against time.

Can Josh save Astra, the galaxy and us all … before it’s too late? Blast off with Jo-Kin in this hilarious space adventure to empower kids with resilience, team building and brain power skills. 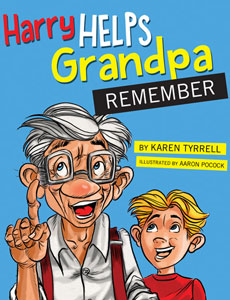 How does Harry help Grandpa remember? 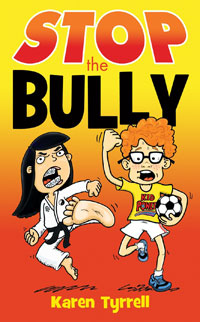 Eleven year old Brian is hiding something. His life is falling apart. Dad abandoned the family. Brian hates his new school. And now an aggressive bully attacks him every day.

Can Brian STOP the Bully without revealing his shameful secret? STOP the Bully is a riveting middle grade novel to empower girls and boys with assertive strategies. The mystery reveals the bullying dilemma from all perspectives. 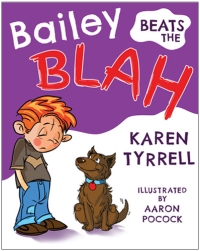 Bailey Beats the Blah by Karen Tyrrell, illustrated by Aaron Pocock is a resilience picture book empowering children 4-8years to cope with sad days. Bailey spring-boards discussion on emotional awareness and pro-active plans on how to lift a child’s mood.

Buy Now – Me and Him: A Guide to Recovery 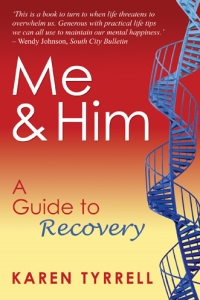 Me and Him: A Guide to Recovery reveals the shock discoveries that cast Karen Tyrrell’s first memoir Me and Her: A Memoir of Madness in a new light. An Australian author and teacher, Karen highlights the crucial role her husband Steve played, as carer, in her recovery from parent harassment and subsequent mental illness.

Buy Now – Me and Her: A Memoir of Madness 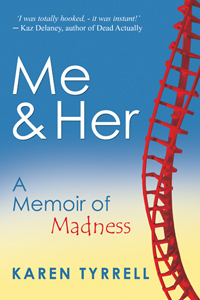 Me and Her: A Memoir Of Madness reveals how Karen Tyrrell, a dedicated Australian teacher is repeatedly harassed by parents at her school to breaking point and beyond.

In a fit of desperation, she escapes and runs. Police and medical professionals discover her hiding in a lonely motel, forcing her into the frightening world of the psychiatric system.